Rachio, a Denver-based start-up, has been selling a "smart sprinkler" for the last year. The device takes the place of a traditional control box on an automated home sprinkler system. It hooks the system up to the Internet -- meaning that you can control it from a smartphone.

It also means the sprinkler system can now check the weather. If it's going to rain or has rained recently, the system holds off on watering. It also automatically adjusts the watering times for each season. And it waters intermittently to allow for maximum absorption -- which also encourages the grass to grow deeper roots and become more drought-resistant. These things alone can cut lawn water use by 30%, according to the company -- no small amount when at least eight Western states are in extreme drought, or worse.

Related: Can these gates protect NYC from the next flood?

The company was formed after Chris Klein and Franz Garsombke -- two software engineers working for a real estate in telligence firm -- went through the last drought in Colorado in 2012. When fall came and the dryness subsided, the two noticed that sprinklers in the area were still running, even though it was raining.

"We figured there had to be a better way," said Klein.

So the pair started writing code and entered a contest run by the Colorado Sprinkler Installation Innovation Network -- a consortium of businesses, governments and universities that promotes economic development in the state. They won $50,000, quit their jobs, and began building the company. Now they have 18 employees, and sales are on track to quadruple from last year, although Klein would not disclose revenue numbers or units sold. 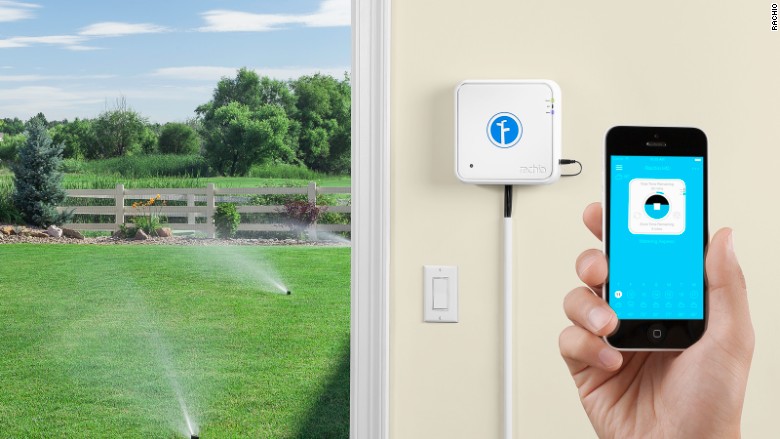 The hardware mounts in your home, the software is accessible online.

The dev ice itself looks like a router, and Klein said most people can install it in 20 minutes. (If you still can't, most likely a gardener or electrician can.)

The entire thing -- plastic, electronics, packaging -- is made in Colorado. Klein said it would probably be cheaper to make it abroad, but the company is convinced that U.S. manufacturing costs will fall as more companies decide to build stuff here -- and they want to be part of the force driving that change.

It's compatible with Nest and other smart home systems, and many areas experiencing drought -- including Los Angeles, Fresno and the Santa Clara Valley -- subsidize the $250 retail price, said Klein.

Of course California is the most populous state seeing a historic drought, and http://www.lonestaraz.com/ Klein said roughly a third Spr inkler Installation of his sales are in that state, up from about a quarter last year.

Rachio isn't the only company to make these devices -- competitors include Blossom and Skydrop.